The Hunt (The Hunt, #1) by Andrew Fukuda review! 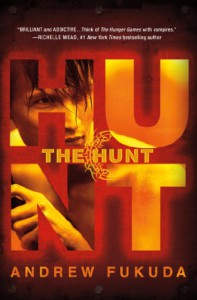 In a world where vampires have eaten the humans to near extinction, what would you do to survive?

Humans, or as the vamps refer to them "Hepers", are an endangered species. The Vampires rule and have some Hepers in glass domes. The domes come up at sundown and retract at sunup. It keeps the Hepers safe until needed.

Every few years the vampires have "The Hunt", where they get to hunt the Hepers. Every vamp is given a number and a lottery system is used to pick the lucky person. This is the first hunt in 10 years so the vamps are riled up. On the day of the lottery Gene prays he wont win, (He is a human masquerading as a vamp) but when his number is called he knows his secret might be revealed.

Ever since he was small his father drilled The Rules into him. For him to survive he has to replicate what the vamps do. He has to be careful and not draw attention to himself. He knows that one small mistake will be his death. When he wins the lottery, he is immediately taken from the school and whisked to the academy to get trained for the hunt. He doesn't even get a chance to stop at his house and get his "supplies". How will he survive in such close quarters with the vamps without the stuff he needs? What will he do the day of The Hunt?

I went into The Hunt with no expectations. All I knew was it had Vampires in it. Well Andrew Fukuda has created a unique, scary and horrible world. The vamps aren't the cuddly kind. They are blood thirsty and horrible. They don't just suck blood, they devour every part of the humans. They drool (alot), the click their bones, they scratch their wrists when happy!! The way the author describes them makes you afraid of them from the beginning. There no humanity left in them!!

I liked Gene. He has the vamps way of life down. He knows he cant get involved in anything strenuous because he isn't as strong or as fast as them, also it would make him sweat, which is a big nono!! He cant show emotion nor sneeze, cough or do anything remotely human. He knows though that he can never forget who he is!! Every day is a struggle to survive and one tiny mistake will get him eaten.

There were times during the book where you think he will be discovered and your heart is in your mouth but overall The Hunt was very slow. Most of the book is just plodding along up till near the end, which is a heart pounding, edge of your seat ride!!! Its a unique world and the author painted it in such a way where you say, no way would I like to be part of it!! I cant wait to dive into book 2 to see where Genes story will take us.